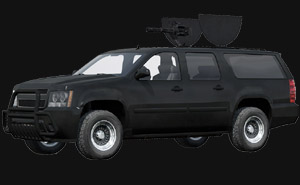 An SUV (Sport Utility Vehicle) is a generic marketing term for a vehicle similar to a station wagon, but built on a light-truck chassis. These particular SUVs are up-armored to protect the security operators inside from small-arms fire. This model has been outfitted with a M134 7.62mm Minigun, which can be retracted back into the vehicle.
"Black Betty" is a nickname often used for this vehicle by ION Inc. contractors. 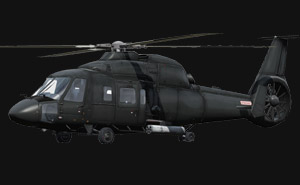 The Ka-60 "Kasatka" is a transport and utility helicopter primarily developed for the Russian Air Force. It had its maiden flight on December 24th 1998. The helicopter was intended to replace the Mi-8 and can be used for reconnaissance, transporting a full squad with combat gear and special operations amongst uses.
Specific improvements over its counterparts are performance, reliability and better aerodynamic configuration of the airframe. Critical parts have been tested to survive piercing by 7.62mm and 12.7mm munitions. The main rotor blades can even withstand 23mm projectile hits. 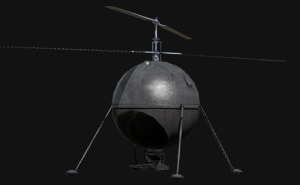 Being an unmanned multipurpose helicopter, this aircraft can be used for many unique roles, such as recoinnaissance, surveillance and data transmission. A piston engine drives a coaxial rotor-system and the spherical fuselage lacks a feature often seen on helicopters: a tail.
Upon customer request, the special engine compartment can be outfitted with special imaging cameras, signal repeaters and more equipment up to a total weight of 80 kilogrammes. The Ka-137 can be controlled by pre-programmed flight programmes, by manual control from the ground or a combination of the two. 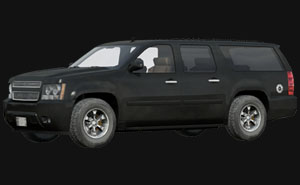 A SUV (sport utility vehicle) is a generic marketing term for a vehicle similar to a station wagon, but built on a light-truck chassis. In this case, this SUV is, in fact, a limousine.