There are a variety of mounted machineguns, grenade launchers and other weapons to set up as permanent defenses. 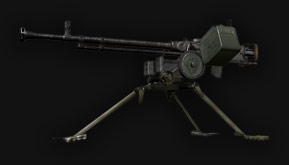 AGS-30 automatic grenade launcher was developed as a lightweight alternative to the already proven and successful AGS-17. This weapon is used mostly for infantry fire support and can be installed on vehicles.

The DShK (Degtyarev-Shpagin Large Calibre) is a Soviet heavy machine gun firing 12.7mm (.50 in) Soviet cartridges. The 'modernised' DShKM version was introduced in 1946. It has been largely replaced by modern NSV and Kord machine guns, but still finds its place in armies and resistance groups the world over.

The Kord is a Russian heavy machine gun. This weapon entered service in 1998 and replaced the older NSV machine gun. At first glance the Kord resembles the NSV but it provides greater accuracy during sustained fire.
The Kord uses 12.7x108 mm cartridges and has a rate of fire of about 750 rpm with an effective range of 2000m.

The Browning M2 .50 caliber Machine Gun, is a World War II era automatic, crew-operated machine gun. The very versatile M2 has served on a wide variety of ground vehicles, aircraft and ships over the years, and is still widely used around the world. This weapon can be used effectively against infantry, light armored vehicles, slow flying aircraft and small boats.

The Mk 19 Grenade Luncher is a US belt-fed automatic 40mm grenade launcher. It entered the service during the Vietnam War and is still in service.
The Mk 19 fires 40mm grenades at a cyclical rate of 325 to 375 rps, with an effective range of 1500m.

The ZU-23 is an air-defence cannon made in Russia. It features two 2A14 23 mm autocannons based on small trailer, which works as stationary mount for fiering as well. The weapon is aimed and fired manually and besides against aircraft, it can be used even against ground targets as troops or lightly armored wehicles.