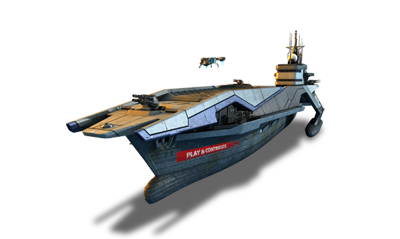 Sea trial – Just a few days after its announcement, Bohemia Interactive’s Play & Contribute Beta for Carrier Command: Gaea Mission has sailed out into the open water. Starting today, those who are joining in will be supporting the game’s development, while experiencing the unique ‘command-and-battle’ gameplay firsthand.

Playable in the P&C Beta is a considerable slice of the ‘Strategic Campaign’. At the start of this mode, players will have to set a few starting parameters, like the number of islands (up to 9 islands in the P&C Beta – 30+ in the full game), the ratio of captured islands and enemy strength. Then, by conquering islands and establishing a network of bases for manufacturing, mining and defense, the campaign is pushed forward, with the ultimate goal being to destroy the opposing enemy carrier. Overall, the gameplay experience in the Strategic Campaign is very similar to the main, story-driven, Gaea Mission campaign, which will be present in the full and final game. However, it does not include the first-person shooter missions, cinematic cutscenes and tutorials. Therefore, to help participants with finding their way into game, a brief and basic manual is supplied together with the beta.

“The Strategic Campaign was partly created as a tribute to the original Carrier Command. As fans of the 80s classic might remember, this mode is entirely gameplay-focused. As such, it lends itself perfectly for the purpose of the Play & Contribute Beta. Even though the game is already a blast to play, we welcome every suggestion that will help us to fine-tune the game’s balance and polish it as a whole.”

To report their findings, beta-participants are advised to make use of the special P&C Feedback Tracker, which can be accessed via www.carriercommand.com/feedback. Experiences can also be shared through the dedicated Carrier Command P&C Beta thread on the official Bohemia Interactive Forums.

Last but not least, be sure to check out the freshly released Carrier Command: Gaea Mission - Play & Contribute video invitation below!