breathtaking action game with strategic elements
Machineguns are effective against enemy troops and light vehicles; they are perfect for suppressing the enemy due to their fire rate and ammo capacity. Machineguns are heavy and prevent soldiers from carrying man-portable launchers. 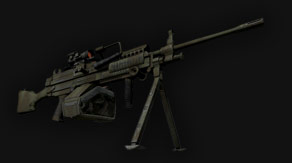 The M240 is a belt-fed, gas-operated machine gun. This weapon is used extensively by US armed forces infantry, mounted on ground vehicles, boats and aircraft. It is highly prized for its reliability, good rate of fire, impact and durability. The M240 uses 7.62x51 mm ammunition.

The M249 Squad Automatic Weapon is a fully-automatic, gas-operated, magazine or belt-fed individual weapon. It is the standard US Army light machine gun based on the Belgian FN Minimi, featuring a 200 round plastic magazine box. The bipod can be collapsed and the weapon can be fired from the hands. The M249 SAW provides the squad with the accurate and sustained fire required to suppress and destroy enemy targets.

The MG36 is a light machine gun variant of the G36 assault rifle and features increased resistance against cook-off. The G36 itself is a 5.56mm caliber rifle, manufactured in Germany. It has been used by the German Armed Forces since 1997.

The M60E4 is the modern reincarnation of the older US general-purpose machinegun. The latest generation of the M60 production line features number of improvements compared to its Vietnam War predecessors: improved reliability, large configuration options or a different forward grip.

The Mk 48 Mod 0 is in fact a modified M240 machine gun, developed for USSOCOM special operation units. In comparison to the M249 this weapon features an improved rail mounting system and integral folding bipod. The Mk 48 is significantly lighter than the M240 while offering better firepower than the M249 SAW. The Mk 48 uses 7.62x51 mm ammunition.

The PKM is the modernized version of the venerable PK medium machine gun. The PKM is just small enough to be man portable and an ammo box attached under the receiver means the gunner always has a full 100-round belt ready to fire. Though it is a heavy weapon to carry the firepower it projects on the battlefield makes it worth the trouble. The PKM can provide sustainable suppressive fire, even at very long ranges.

The RPK-74 is a light machine gun, first presented in 1974. It is a modernized variant of the AK-74 rifle and the modifications implemented mirror those made to the AKM. The RPK-74 uses 5.45x39 mm cartridges.