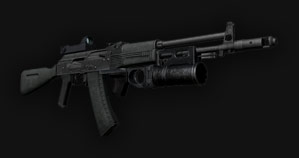 The Mk16 is a light-caliber version of the modular rifle made for the US Special Operations Command (SOCOM). This weapon still uses the 5.56x45mm NATO cartridge, but it is designed to operate better in the harsher conditions and can be fitted with numerous accessories: EGLM grenade launcher, silencers or wide selection of weapon sights.

The Mk17 is a heavy version of the modular rifle made for the US SOCOM. The weapon is chambered for more powerful 7.62x51 mm NATO cartridge, but maintains the advantages and modularity of its lighter version.

The Fusil Automatique Léger (Light Automatic Rifle) or FAL is a self-loading, selective-fire rifle produced in Belgium. It was adopted by many NATO armies during the Cold War.  It was nicknamed "the right arm of the Free World" because of its prevalence and widespread use among the armed forces of many Western and other non-Communist countries during the Cold War.

The Sa-58 is a 7.62mm assault rifle designed and manufactured in Czechoslovakia and accepted into service in the late 1950s. Despite its comparably old design, it is still used by the Czech army because of its durability and reliability in the extreme conditions. The modernized version with RIS rails can be fitted with standard Western weapon accessories.