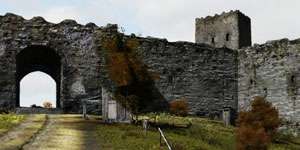 Chernarus has lots of old castle ruins, keeps and fortresses, which were built at the turn of the 11th and 12th century by Duke Kozlov, for the means of protecting important roads and grounds, which were often attacked from the sea and by northern neighbors. The Pik Kozlova above the Chernogorsk city is named after this duke, who is considered a founder of the first Chernarussian state. On the peak above the city there used to stand a warning post which protected the local provinces from pirate raids. This rocky peak is a favorite lookout point nowadays.

The majority of the structures of that time were made of wood, only the ruins of Rog keep and the famous Devil's Castle are preserved to this day. The Devil's Castle received its name many years later, perhaps sometime during the end of the 13th century. After the fall of Kozlov's Principate at the beginning of the 13th century, the fortress system fell apart; fortresses that weren't burned down were taken apart stone by stone, as needed for the structure of surrounding estates, or for different purposes.

The former Kozlovo Castle, now called the Devil's Castle, was supposedly inhabited by the yeoman Jakub Čert (Devil) from Gorka. His bandit campaigns started here at the castle. He enlarged the keep of the castle, using the loot from these raids and the castle holds his name to this day. According to legend, the Devil's Castle was burned down during the zagorian Karzeg's rebellion, Jakub Čert burned in the castle's main tower after he refused to surrender to Ataman Simurg. Only burned walls remain of the castle, haunted to this day by the spirit of Ivan Kozlov. Whatever the truth is, Devil's Castle is one of the most remarkable architectural sights in Chernarus and it became a rewarding destination for tourists.